Booking Confidence | Where Can I Travel? | Win a £500 Voucher | 5% Early Booking Discount

The Aeolian Islands are a volcanic archipelago in the Tyrrhenian Sea just north of Sicily, named after the demigod of the winds Aeolus. During the tour, you will visit the most attractive islands: Lipari, Vulcano, Salina, and Stromboli. Then you will explore beautiful Taormina, the Pearl of the Mediterranean, with its world-famous ancient Greek theatre, and finish your adventure with a guided climb of Mount Etna, rising 3323 m above sea level. Relish the excellent Sicilian cuisine with its Arab, Spanish, French and Greek influences and sample the unique local wines.

Arrive at Catania Airport – we advise that you arrive before 4 pm in order to use the local public transport. Here you take a bus or a train to Milazzo or Messina, where you board the hydrofoil boat to Lipari – your overnight place for the first four nights. It is also possible to pre-book a private transfer from Catania airport to Milazzo/Messina. Lipari is the liveliest of the Aeolian islands; you can visit the old fortress, stroll around the fish market or enjoy some good music in a bistro of Marina Vecchia.

For the next days, you have a selection of walks and excursions you can do. You are free to choose which ones to do and in which order. Three walks are on Lipari Island, while the other two are on Vulcano and Salina islands.

Walk 1 – Lipari Island: The southern tip and Mt. Guardia
This varied walk on the south tip of Lipari with views on the Island of Vulcano starts and ends at the port. In the first part, you walk to an astronomical observatory overlooking Vulcano Island and the rugged cliffs called “faraglioni”. In the second part, you descend to the old town centre of Lipari with its historical and artistic sights.

Walk 2 – Lipari Island: Walk from Acqualcalda to Canneto
From Lipari, take the local bus to Acquacalda, where you walk from one beach to another through the evergreen vegetation of the Mediterranean scrub. On your way, you have pumice caves and magnificent views of the surrounding islands. Take your time to absorb the views at the panoramic viewpoint (346 m) before descending to Canneto, the most popular beach of Lipari, where you can enjoy a refreshing swim before taking the local bus back to your hotel.

Walk 3 – Lipari Island: Walk from Lipari to Quattropani
From Lipari, take the local bus to Quattropani, the starting point of this walk along the island’s western coast – the wildest part of Lipari. After some magnificent land and sea views, you reach the San Calogero thermal baths, considered the oldest spa in the Mediterranean, dating back to the Mycenaean period. You then walk back to Lipari through villages and fumaroles.

Walk 4 – Vulcano Island: Round walk to the Great Crater
Vulcano is a small and spectacular island. Here you walk up through an almost lunar landscape to the “Gran Cratere”, the great crater, yellowish from the sulphurous smoke constantly emitted by the volcano. From the top, you have exceptional 360° views of the island and the volcanic archipelago. The descent along green slopes offers amazing contrasts of colours with the blue sea and the dark grey rocks. You return to Lipari with the afternoon boat.

Walk 5 – Salina Island
Salina is an island with a magical, out-of-time atmosphere – a short hydrofoil ride from Lipari. Take the bus to Semaforo of Pollara, where the walk along the western coast of Salina starts. It is a demanding climb through steep ups and downs, but your efforts are rewarded with amazing views on the Filicudi and Alicudi islands. The walk ends in Rinella, where you can take a bus back to Salina’s main port. Pollara is the village where the film “The Postman” was filmed in 1995.

Today you transfer to Stromboli; at the port, your luggage will be taken to the hotel while you stroll through the narrow whitewashed streets to the hotel. The walk on Stromboli is a very spectacular experience as this volcano is active and constantly erupting. You have 2 walking options:

The circular walk takes you to 272 m, from where you can see the lava flow field called the “Sciara di Fuoco”; this option is open to everyone and is normally always accessible.

The second option is a strenuous climb to the top of Mt. Stromboli with an authorized volcanologist guide in a guided group walk to the top 900 m. The walk starts in the late afternoon, reaching the top at sunset, where you stop for a good while to observe the constantly erupting volcano from close up. The descent is at night; you need to bring a flashlight as there are no public street lights on this island. The climb/descent of the top half of the volcano is on volcanic ash. IMPORTANT: Access to the top is limited to 80 people at a time and only if accompanied by a volcanologist/mountain guide. This walk may be restricted or cancelled at short notice due to volcanic activity or bad weather. The guided tour to the top Stromboli is prebooked, as it can be difficult to book a place once there, BUT has to be paid on the spot.

Today you go from Stromboli to Milazzo by hydrofoil and then take the train or bus to Taormina. You have the whole afternoon to explore on your own this beautiful and lively city. Visit the Cathedral and the ancient Greek theatre, built in the 3rd c. B.C. and wonderfully preserved. Quench your thirst with a frozen “granita”, a local speciality made up of shaved ice and syrup accompanied by a delicious brioche.

After breakfast, you are transferred to Piano Provenzano, where an easy guided walking tour takes you up the majestic Mount Etna. You will walk through lush vegetation on old and new lava flows and enter a lava flow cave carved into the mountain. We have included lunch in a winery, serving locally-sourced produce. The afternoon continues with a visit to the unique Alcantara Gorge with its bizarre rock shapes formed as the ancient lava flow entered the freezing cold river. You return to Taormina around 6.30 pm where you can enjoy the last evening in town.

End of the programme after breakfast. You can take a bus to Catania Airport or train to Catania and then a shuttle bus to the airport. Or you can extend your stay in Taormina.

In Lipari and Stromboli, you stay in cosy centrally located and family-run 3-star hotels. In Taormina, you stay in a modern, centrally located 3-star hotel. All rooms have private en-suite bathrooms. All places have been carefully hand-picked by us, and their quality is regularly monitored. We have tried to choose accommodations that offer friendly service, clean and comfortable rooms and local flavour.

*Hotels are subject to availability. In case a particular hotel is fully booked for your desired dates, we will replace it with a hotel of equal value and quality level. We will provide exact accommodation details to you upon booking confirmation.

A buffet breakfast will be served every day. Lunches and snacks can either be bought from local shops or you can eat at local restaurants. Lunch on Day 7 is included. Dinner is available either from the restaurant in your accommodation or the restaurants in the town where you stay for overnight.

The walks are along well-trodden, uneven trails, footpaths, mule tracks and some asphalt roads. You will need to be sure-footed because you will often be walking on rocky and stony paths. On some days, you have alternative walks of different difficulty provided to choose from (read more about difficulty grades). We strongly advise you to follow only marked trails and never try to shorten the path through the unknown and unmarked terrain. We will provide you with detailed road notes and maps, and you can call our 24/7 local assistance phone number anytime. More detailed info on route navigation will be included in your holiday information pack.

This trip is available from 1 April until 27 July and from 25 August until 31 October, departing every day. Late spring, the early summer and the entire autumn are beautiful in Sicily. It is too hot for walking in August. The best time to see Sicily and the Aeolian Archipelago is from April to June when the spring flowers are in bloom, the weather is just warm enough, and the temperature of the Mediterranean allows for the first dips of the season. The months of September and October are also an excellent time to visit the region, while the temperatures are still mild. The flexibility of self guided holidays means that there are no fixed dates and you can start your trip on any date in the season – so please indicate desired beginning date when booking.

Our recommended arrival and departure airport for this tour is Catania Airport.

Arrival Lipari
We suggest that you arrive before 4 pm so that you have the time to catch the bus. From the airport, you can take a bus to go directly to Milazzo or take a local bus to reach the railway station to go by train to Milazzo or Messina. Two bus companies are going to Milazzo from Catania airport: for the first one, you can find the timetable and information on www.eoliebooking.com/navetta/indexeng.asp. Reservations must be made before 13:00 h on the day before the intended journey. The second direct bus service is Giunta Bus; there are a few services, so please visit www.giuntabus.com.

To reach Messina, you can take the local bus AMT “457 ALIBUS” from Catania airport to Catania Train Station and then take a train to Messina: trenitalia.com. You can also take a bus called SAIS Autolinee from Catania to Messina and back, visit the website www.saisautolinee.it/ricerca/index.asp.

Departure Taormina
On departure from Taormina, you can reach Catania airport by public bus: www.interbus.it. Another option is to take a train to Catania (check trenitalia.com). From Catania city, there are many buses to the airport.

Important: We recommend booking an early arrival flight and a late afternoon return flight, so you can arrive and leave with public transportation to avoid expensive optional private transfers; in case you can’t get good timetables, if you want to save money, it’s better to book extra nights in Catania or Taormina. Sunday is always the worst day to arrive and leave due to very few public means of transportation being in service.

This holiday not only had erupting volcanoes, fabulous hospitality and a plethora of dramatic landscapes to walk in, it also featured gorgeous Mediterranean grottoes to swim in. The arid volcanic landscape of Lipari and Vulcano are offset with the local boat trip featuring stunning swimming possibilities. The experience of Stromboli included dining at night under an erupting volcano. Finishing with two days in gorgeous Taormina had the highlight of the tour of Mt Etna. This included a knowledgeable guide taking us through a unique graduation of changing ecosystems, a delightful lunch in a vineyard and finished with a cool off in a spring fed gorge. The tour included much more than I expected and would delight a flexible, adventurous traveler. 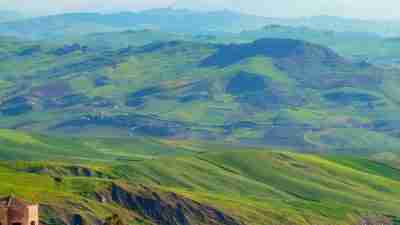 Price from £740
View trip about Via Francigena in Sicily: Palermo to Agrigento 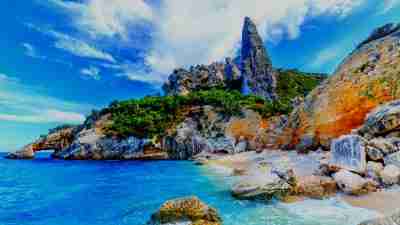 Price from £745
View trip about Walking in Sardinia: The East Coast and Supramonte

Price from £625
View trip about Trails of Albanian Alps 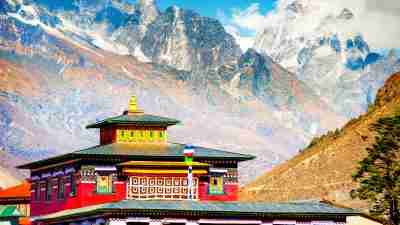 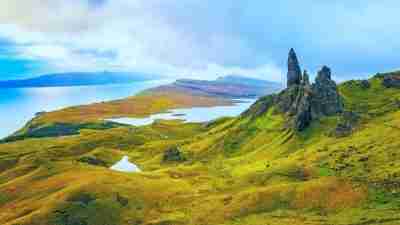