Our travellers rate our Netherlands holidays as 4.9/5 based on 20 reviews.

Not surprisingly, when you go on famously flat Netherlands tours, cycling is pretty easy. But it is also very easy on the eye, with trails that take you from one historic and handsome Dutch city to another. Amsterdam, of course, needs no introduction, a city where sustainable, green lights shine much more brightly than its red ones.
Our Highlights of the Netherlands Cycling Break, where you head to Haarlem, tulip and windmill land, is a perfect introductory Netherlands cycling holiday. For a longer and more in depth tour of the Netherlands, cycle on a cultural circuit through the likes of Gouda and Delft, starting and ending in Amsterdam. Cycling in the Netherlands is so blissful, that it feels as if you can just keep going forever. Which you can, in fact, all the way to Bruges or Paris if you so choose. 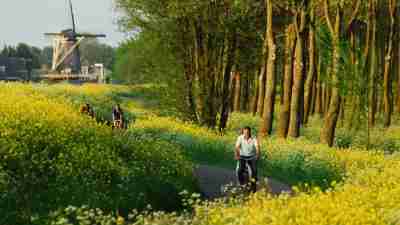 Price from £645
View trip Cycling the highlights of the Netherlands

Price from £545
View trip Highlights of the Netherlands Cycling Break 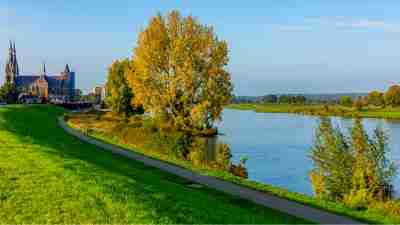 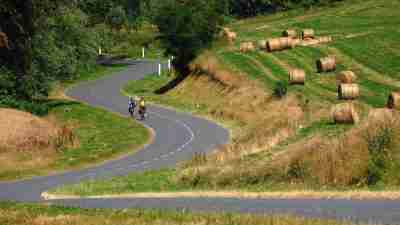 Price from £1,295
View trip Cycling from Amsterdam to Paris 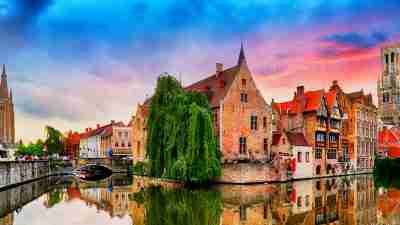 Price from £690
View trip Cycling from Amsterdam to Bruges

Cyclists are given priority over motorised vehicles in the Netherlands, and so your Netherlands cycling holiday will always get off to a flying start in this historic capital city. As well as cycling along the city’s unique network of canals, with their iconic bridges and elegant waterfront terraced houses, Amsterdam is a culture vulture’s arcadia. Park up and visit (or just cycle through) the Rijksmuseum, reel at the real Van Goghs and the extraordinarily moving Anne Frank House is a must. To get out of town, follow cycling routes to the nearby fishing harbour of Volendam or the traditional wooden houses of Zaandam.

Delft is a delightful stop, about halfway around this Netherlands cycling holiday cultural circuit. Just like the pottery that the city is famous for, it’s a delicate, charming city with no hard edges, the canals creating the prettiest of patterns, and a heritage of artistry too – as Johannes Vermeer (1632-1675) lived in Delft all his life. The Vermeer Centre is a museum dedicated to the artist of the Dutch Golden Age, but his golden work is to be seen at The Mauritshuis in The Hague, just a 9km cycle away. The Rijksmuseum has also programmed the most prolific exhibition of his work ever, from February to June 2023.

Gouda is in the green heart of the Netherlands, a city that is about so much more than its famous cheese. A proper slice of Gouda is topped off with St. John’s Church, with the spectacular 72 stained glass windows dating back to the 16th century. The Stadhuis, or town hall, is one of the oldest Gothic town halls in the country, located in Markt, the market square since 1450 where the Thursday cheese market has also taken place for centuries (April-August). Not cheesy at all is the Gouda Museum, with a fine collection of French and Dutch paintings.

Just 21km from Amsterdam, cycle from the capital to this peninsular city separated from the North Sea by the magnificent dunes, polders and forests of Zuid-Kennemerland National Park. Aptly, the city’s name means ‘home on a forested dune’ and it is perfectly placed on our short Netherlands cycling tour of the North Holland peninsula. For cultural highlights in this elegant city with cobblestone streets, hofjes or tiny residential squares, and canalside townhouses, visit Frans Hals or Teylers Museums, for arts and science hits respectively. In April and May, you can also enjoy the region in full bloom as tulips have been thriving in Kennemerland’s sandy soils since the 16th century.

Holland’s oldest university town, Leiden has a perfect fusion of heritage and tutelage, art and architecture, waterways and cycle ways. It’s also proud of the fact that Rembrandt was born here, and the Museum de Lakenhal houses some of his work, along with other greats. The building was built in 1640 as an inspection hall for cloth makers, just one of many industries to thrive here, brewing being another. Leiden is both lovely and lively, especially in spring and summer, when people gather on the many waterfronts, rent boats or kayaks, and just go with the flow.