Skip to content
Our travellers rate our Lithuania holidays as 5/5 based on 1 reviews.

It’s striking that Lithuania’s capital city, Vilnius, has St. Christopher, the patron saint of travellers on its coat of arms. On our Lithuania tours, you immediately feel that sense of welcome and the doors to its handsome landscapes are always open. They are also proudly protected, with five national parks peppered across its coast, forest and wetlands.
One of the most striking and unique national parks for walking in Lithuania, is Curonian Spit, a 98km sandy peninsula that resists destruction by the elements, by hook or by crook. This, and many of Lithuania’s other natural highlights are still well kept secrets to European travellers. Unless you’re a swan or a stork, that is, just two species of millions of migrating birds that have known about Lithuania’s welcoming shores since time began. If you are cycling in Lithuania in September, particularly around Nemunas Delta Regional Park, and indeed on any of our Lithuania tours, you will receive a welcome chorus like no other. 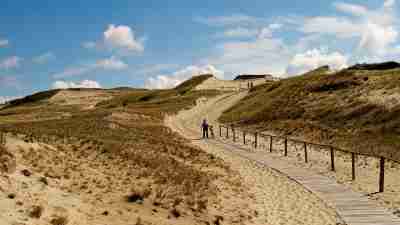 Price from £1,220
View trip Walking Holiday in Lithuania and Latvia 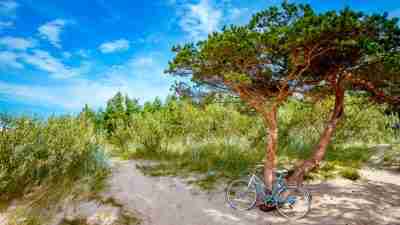 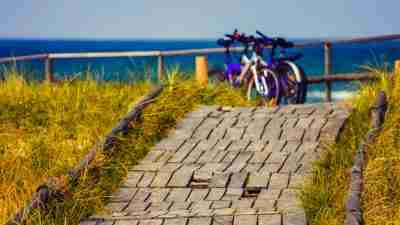 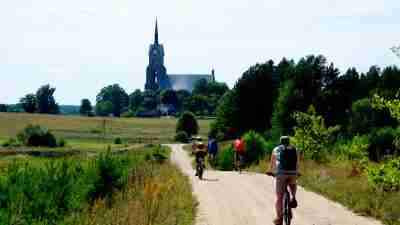 Where to go on holiday in Lithuania

As you will discover on a walking holiday on the Curonian Spit, this 98km-long sandy peninsula is a very special place. It feels almost Pacific in its prettiness. Also a UNESCO World Heritage Site, not surprisingly with its fragile ecosystem of pine groves, wetlands, vegetation-covered dunes and the drifting Parnidis Dune, is littoral Lithuania at its most lovely. The spit is topped and tailed by the traditional, and culturally rich port town of Klaipėda and the quaint fishing town of Nida, with the Curonian Lagoon on one side and fine sandy beaches of the Baltic Coast on the other. You can also visit the Spit on a Lithuanian and Latvian walking holiday combo.

With the ancient Old Town at its core, enveloped rather than enshrined by its growing modern metropolis, and the river Neris running through it, this is a delightful Baltic town to explore. You will get a great perspective from the tower of St John’s Church. Seek out boutiques and cafes in the Užupis district, fill your backpack at Tymo Turgus food market on Thursdays, and be a Vilnius vulture for culture at the Nacionalinė Dailės Galerija (NDG) or the Vilnius City Opera.

Trakai plays such an important and architecturally impressive role in Lithuania’s cultural heritage, that it has earned protected status as an Historical National Park. It’s also a wonderful stop-off while cycling or walking in Lithuania, just 25km west of Vilnius, this small town with just over 5000 residents, packs a pretty punch, with Trakai Island and Castle, and the Old Town, all located on Lake Galve, just one of three lakes that envelop this former capital city. There is a wide array of rich woodlands and restorative lakeshore walks, such as out to Varnikai Nature Walk, just 3km from the town.

Pull yourself away from the coast while cycling in Lithuania to explore the Nemunas Delta, with Rusnė Island at its beating, green heart. This wetland is enriched by an array of intertwining rivers, with Krokų Lanka lagoon creating meadows and waterways that are perfect for canoeing on. Park your bike for a while to enjoy the charming Rusnė village, lighthouse and harbour, or the collection of waterways around the small fishing village of Minija. And definitely bring your binoculars, as this is one of Europe’s top birdwatching areas, with over 200 species being nurtured by Nemunas.

Things to do in Lithuania