Skip to content
Our travellers rate our Japan holidays as 5/5 based on 4 reviews.

In a country that has perfected the art of giving exquisitely wrapped gifts, it is not surprising that Japan proffers the prettiest of parcels to its visitors. With layers of natural and cultural heritage to be unwrapped on Japan tours, you can saunter easily between ancient walking trails such as Nakasendo or Kumano Kodo and traditional ryokan rural inns. Or between mountain top temples and a bed in a Buddhist temple.
Japan protects its treasures and traditions in a way that is surprising to many visitors who have expectations of karaoke and kitsch, matcha and manga. On walking holidays in Japan, swap ultra modern for unchanged traditions, relax in onsen bathhouses or contemplate the big picture at shrines and temples. We have opted to only offer self-guided walking tours, Japan being a country where we believe you need to both take your time and step back in time, in order to enjoy its gifts graciously and wholly. 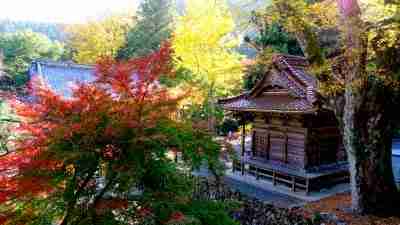 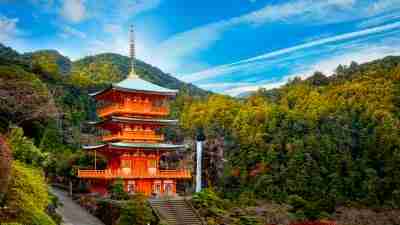 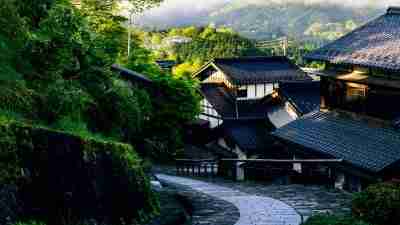 Where to go on holiday in Japan

Japan’s ultimate spiritual trail, the Kumano Kodo, has carried pilgrims for centuries across the peaks and valleys of the Kii Peninsula, to worship at three magnificent Grand Shrines en route: Kumano Hongu Taisha, Kumano Nachi Taisha and Hayatama Taisha. The Kii Mountains are still considered by many to be sacred landscapes, with nurture by nature dating back to Japan’s Heian period (794-1185) whether you were an emperor or commoner. This 258km walking route has various sub-sections and it’s the inland, mountainous Nakahechi section that attracts those seeking adventurous walking holidays in Japan.

Of Japan’s four main islands, Shikoku is the smallest but, for many, the most spiritual, with an ancient 1000km trail that connects 88 Buddhist temples and shrines. You don’t have to visit them all, and our Shikoku walking holiday takes you to some of its most sacred and sweet spots, such as the place where Kobo Daishi, founder of Shingon Buddhism, chose to meditate. Or to the elevated Ryusuian Temple located on a hike up Mount Shosan-ji. You will explore some sweaty spots too, with natural hot spring baths a feature of this trip.

Traditionally created so that 17th century feudal lords, samurai and traders could transport their missives and minions between Kyoto and Edo (now Tokyo), the Nakasendo Trail now has a more peaceful mission. To provide a slow, central mountain route through ancient forests, along ridges and mountain paths with views of the Japanese Alps, all dipping down to a collection of 69 ‘post towns’, such as Magome, Tsumago and Narai, still proudly hosting travellers in traditional ryokan inns. The traditional trail is 500km, but our self-guided walking tour covers a rich collection of Nakasendo highlights.

This is part of our Nakasendo Trail holiday and a fitting finale. Uplifting too, as Kamikochi is gateway to the Chubu Sangaku National Park and its spectacular Hida Mountains. Kamikochi is a mountain resort tucked into a glacial basin fed by the crystal clear waters of the Azusa River. The river is the artery of the main Kamikochi Trail, with picnic places beside its larger ponds, traditional bridges to take you from one rocky shore to the other and snow-covered peaks beckoning adventurers to even greater heights.

Things to do in Japan