Our travellers rate our North Macedonia holidays as 5/5 based on 5 reviews.

The name North Macedonia was hard won by this small, independent Republic in 2019. Based on our own North Macedonia tours, we think that it merits several middle names too. Hidden depths should definitely be in there, natural and cultural ones – given that this country has a cornucopia of caves in Matka Canyon or Mavrovo National Park but also as a wealth of multicultural storytelling.

Let’s throw in the name Šar too, in honour of the impressive peaks and ridges of the north-west, or perhaps simply go for Titov Vruh, the highest summit (2,747m) which you can head up to while hiking in North Macedonia. Prespa and Ohrid make fine names too, honouring the two sparkling and splendid lakes to be explored on our North Macedonia cycling holiday. One final middle name for North Macedonia would be reserved. It’s quiet, doesn’t show off and it’s still very much reserved for those in the know. 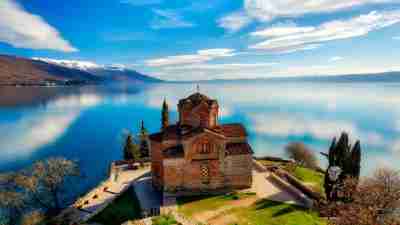 Price from £775
View trip Cycling in North Macedonia and Albania 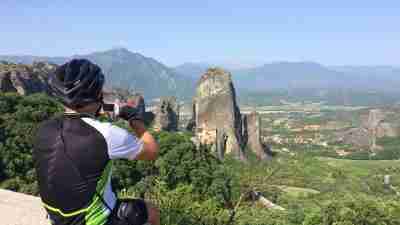 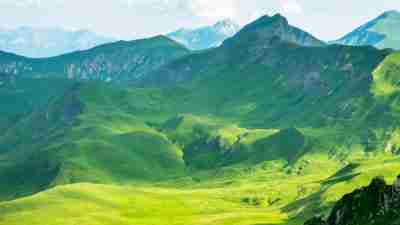 Price from £1,125
View trip Via Dinarica in North Macedonia 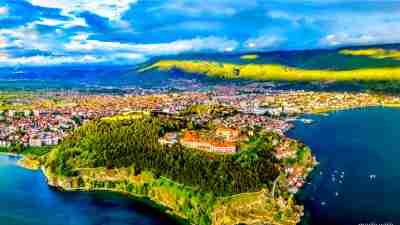 The Šar Mountains, also known as the Sharr or Malet e Sharrit have a spectacular reach from the north-west of the country into Kosovo, and our self-guided walking tour along the Via Dinarica takes you up, over and through them. You get to hike up their highest summit, Titov Vruh (2,747m), known as Turk or Shar with one ridge route option that covers a plethora of other peaks. Ljuboten (2,498m) is another precious and perfectly pyramidal peak with views across the whole Šar ridgeline.

Not surprisingly, North Macedonia’s capital is a honeypot of mixed heritage. You could tick off a bingo card of architectural influences here, with Roman aqueducts and bridges, Ottoman mosques and Turkish bathhouses, a superb medieval bazaar which is one of the biggest in Europe, and the Byzantine Kale Fortress keeping guard over them all, including plenty of concrete and kitsch. Hike up Vodno Mountain (1,066m) to the iconic Millennium Cross for views across the city, and Bingo!

If you’re hiking or cycling in North Macedonia, Matka Canyon makes for a fitting finale as it’s just 17km from the capital city. Get there early to revel in this dramatic canyon, cut to depths of 1,000m by the River Treska, creating a karst limestone playground. The canyon has ten spectacular caves, with Vrelo the visitable one – and visit it you must to see its giant stalactites, and two lakes. The Canyon has its own Matka Lake too, created artificially by a dam, and boat trips, swimming, paddle boarding and kayaking for full immersion. Total immersion is only for the brave, as the water is around 7-9C.

Ohrid is worthy of a standing ovation, it’s so beautiful. It’s also a magical way to start a North Macedonia cycling holiday, which takes you over the border into either Albania or Greece. Or stop at this idyllic lakeside town halfway round a cycling the highlights holiday of North Macedonia. And it is unquestionably a highlight, with both the lake and town listed as a UNESCO World Heritage site. The town because, among many reasons, it’s considered to be one of the oldest human settlements in the world, and the lake for its biodiversity but also for its ancient waterfront monasteries.

Up in the north-west of the country near the border with Albania, Mavrovo National Park protects three of the country’s highest peaks, including Great (and greatest of them all) Korab, at 2,764m. It is also home to Lake Mavrovo, one of the country’s largest lakes with the Šar Mountains to the North and Bistra Mountains to the south. The striking, abandoned St Nicholas church can be seen in the middle of it, half-submerged when the lake was constructed for hydroelectric purposes in 1952. You can swim and boat here, but also pedal around the lake on this cycling holiday.

Galičica National Park protects the forests, flora and other fauna of Mount Galičica, which stretches its mountainous magnificence across into Albania, but the national park is on the North Macedonian side. The park has a spectacular location not only because of its panoramic views, but also because it ‘s like a giant bridge connecting the vast Lake Ohrid and Lake Prespa. On our North Macedonia cycling holiday of the country’s highlights, cycle one day to Lake Prespa and then, on the next, up through the mountain’s forests to Galičica Pass at 1,590m for unforgettable views, and then enjoying a perfect descent down to Lake Ohrid.