With over a thousand islands, divided up into not just one but several archipelagos, Croatia’s coast is a treasure trove of natural treats. This Southern Dalmatia small ship cruise is a spectacular circuit, starting and finishing in the ancient port city of Split. Sleeping on board a traditional wooden vessel (other options available), wake up to island idylls along the way such as Mljet National Park, with two inland saltwater lakes, the glamorous but also gorgeously green island of Hvar or Korcula, with its ancient fortified old town. For an unforgettable finale, you anchor at Brač, which boasts the highest peak of all the islands as well as the exquisite beach of Zlatni Rat.

This Southern Dalmatia tour also brings you to Dubrovnik, the Adriatic’s finest walled city where, approaching it by water, is one of the best ways to take in its waterfront wonders.

The sailing routes may change on the spot due to weather conditions and dock availability. Departure is during morning hours, usually after breakfast.

Arrival in Split and check-in after 11:00h. Departure at 13:00h towards Makarska. Lunch is served while cruising along the Dalmatian coast. Afternoon swim stop in one of the secluded bays en route. There is an optional zipline ride over the Cetina river canyon for adrenaline lovers. Enjoy Makarska in the evening. Stroll the waterfront with its wide promenade, a pathway out to a lighthouse and some cool bars. The main square is home to an impressive church and other monuments and sights. Overnight in the port of Makarska.

Early morning departure towards Mljet, with a swim stop on the Pelješac Peninsula. Mljet Island is protected by national park status (entrance fee to be paid on arrival). In the afternoon, visit the island’s seawater lakes, the tranquil St Mary’s Island in the middle of the large lake, its church and monastery. Walk or hire a bike to explore these stunning lake areas. Overnight in the port of Polača or Pomena.

After breakfast, your boat journey takes you towards Dubrovnik, the most famous town in Croatia and, for many, the highlight of this cruise. The Irish writer George Bernard Shaw called Dubrovnik “heaven on earth”. With unbeatable views along the way, enjoy this beautiful stretch of coast. Upon arrival, explore on your own or join a guided city tour (included on Premium and Premium Superior), followed by an optional cable car ride up to Srđ mountain for spectacular views of the Old Town. Don’t miss Stradun in the Old Town and walk at least part of the 1,940m long city walls which have protected Dubrovnik for centuries. Overnight in the port of Dubrovnik.

Late morning departure towards the island of Šipan or the small town of Trstenik on the Pelješac Peninsula. Gorgeous spots for an afternoon swim and time at leisure with the possibility to visit a local winery. In the evening, enjoy the optional special Captain’s dinner on board (included on Premium Superior and Premium). Overnight in the port.

After breakfast, departure towards the island of Korčula, one of the most famous islands in the Dubrovnik region. It’s the birthplace of the famous explorer Marco Polo. Lunch on board in a bay near Korčula town. The town walls and bastions date back to the 13th century, and there are is no shortage of beautiful churches and museums to visit. Join an optional sightseeing of Korčula town (included on Premium Superior) or an optional wine and local appetiser tasting at a local winery before dining in one of numerous seafront restaurants or konobas. Overnight in the port of Korčula.

Early departure towards the Paklinski Islands near Hvar (the longest island in the Adriatic) for lunch and a swimming stop. Later, there’s an optional afternoon sightseeing of Hvar (included on Premium Superior), which is so stunning it feels almost like a film set. The Renaissance cathedral has its original tower and is the oldest community theatre in Europe, founded in 1612. Hvar is known as a jet-set island, offering plenty of entertainment and excellent restaurants, bars and cafés serving drinks long into the night. For island shopping, the local lavender sold on market stalls is a favourite. Overnight in Hvar.

Last but not least is the island of Brač. The most famous (and most photographed) beach in Southern Dalmatia is Zlatni Rat (Golden Horn) near Bol – famous for its ever-changing shape – as this is a shingle bar that moves according to the wind. Great place for a swim stop. Bol is a typical fishermen’s village that has maintained its traditional atmosphere despite it’s now being a popular touristic spot. After lunch, on the way to Split, you can opt to join a river rafting excursion on the Cetina river. The approach to the Split Riviera is wonderful and offers the best views from onboard. Upon arrival, join the optional guided tour of Split, a monumental city which, together with the famous Roman Diocletian Palace, is under UNESCO protection. Split is full of bistros and restaurants serving local specialities.

Traditional ensuite ship: the base prices are for a stay on a traditional ship – wooden vessels featuring air-conditioned cabins with private shower/toilet, mostly bunk beds, and an air-conditioned salon. There are also lower deck cabins available at a lower price. There is free wifi on board.

Continental breakfast and lunch (as detailed in the itinerary) are included in the package. Dinners are available at restaurants of each overnight stop. There is a possibility to book a Captain’s dinner, which is paid for on board, or it is included on the Premium and Premium Superior ships.

This is an easy tour that requires basic physical fitness. You decide where and how much to walk while exploring the different stops.

This trip is available with departures on Saturdays from mid-April until mid-October (for available departure dates, click the Dates & Prices button on the right). The ships accommodate between 30 and 38 people. Please check in advance with us for available cabins on a particular date.

Croatia’s coast and islands, from Istria and Kvarner in the north through to Dalmatia in the south, are governed by a Mediterranean climate. However, it is usually several degrees cooler in the northern Adriatic than in the south. In the summer, the average temperature is between 24°C and 26°C along the coast.

The most convenient airport for arrival is the one at Split, which is well served by air from the UK and some central and northern European countries.

Getting to Split by bus is one of the cheapest ways to travel. Split bus station (Autobuski Kolodvor) is conveniently located in the Split port area. The city is very well connected with all principal Croatia cities like Zagreb, Dubrovnik, Zadar and Sibenik as well as with some international destinations. Travelling to Split by train is cheaper than by bus, but it is slower and not as popular. The train station called Zeljeznicki Kolodvor is behind the bus station and very close to the ferry port.

Our travellers rate our Croatia holidays as 4.8/5 based on 61 reviews. 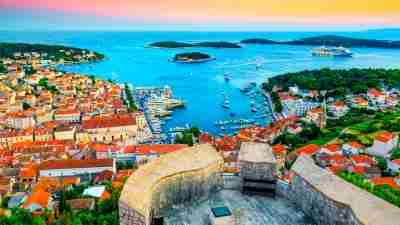 Price from £580
View trip Dalmatia by Bike and Boat 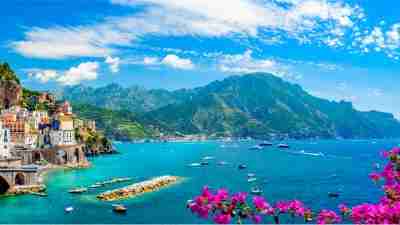 Price from £540
View trip Walking the Amalfi Coast and Mountains 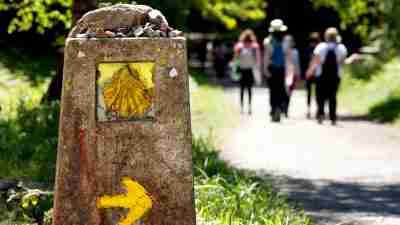